Apprenticeships are a route to social mobility. Research has shown that apprentices earn more over their working life than those who just do A-levels. And with the six-fold growth of higher apprenticeships since 2010/11 there are more chances than ever for non-degree routes into top jobs

The Commission is supportive of reforms to increase the quality and quality of apprenticeships. The increasing involvement of employers in apprenticeship design is at the heart of these changes, following the recommendations of the independent Richard review.

We said in our annual report that the economic recovery needs to be matched by a social recovery. So there is scope to go further and faster in this space: more firms need to provide young people the opportunities to get in and get on. We called for half of workplaces with more than 10 staff to offer apprentices by 2020.

The dramatic drop was caused by a huge reduction in apprenticeship starts by over 25-year-olds. These were down by a third between 2012/13 and 2013/14 – making up nearly 95 per cent of the total decrease. The remainder was caused by a drop in 19-24 year olds starting intermediate and advanced apprenticeships. Given the lion’s share of the change is due to the older group it is important to understand why the number of older apprenticeship starts is declining, if the trend likely to continue and whether we should be worried. 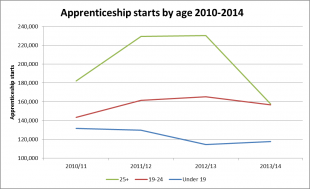 First, the Commission identifies two possible explanations: changes to adult apprenticeship funding and ‘pricing out’ of adult apprenticeships through higher quality requirements. Over the last few years the government offered 24+ learning loans for advanced apprenticeships, then cancelled this policy (writing off some minor debts in the process). This may have put some older people off. Alternatively, the drive for quality (including introduction of a minimum 12 month apprenticeship duration in 2011) may be causing a decline in the number of older people starting low-level apprenticeships. If anything, the data supports the funding explanation – as the biggest decline in over-25 starts is in the ‘advanced’ (A-Level) apprenticeship category: a 32 per cent drop compared to a 4 per cent drop for ‘intermediate’ (GCSE-level). But overall it is too soon to tell why this is happening.

So second, is this a tidal wave or a change of tide? It very much depends on the cause. If this was driven by now-cancelled funding policy we may expect to see the number of over-25 apprenticeships recover. But if this was caused by reform forcing out low quality apprenticeships this may be more of a permanent move. Only time will tell. Close attention to the numbers by policy makers is required.

Third, and finally, is this cause for concern? The good news is the number of apprenticeship starts by under 19 year olds is up by 3 per cent to just shy of 120,000. The decline in apprenticeship starts by this age group that the NAO pointed out appears to be halted, at least for the moment. This improvement should be greeted with caution; starts by under-19s are still down a tenth from the level in 2010/11. Frankly, the number of apprenticeships open to the young (under 25s) has remained flat (actually slightly down) for 2 years now, when with the recovery in employment, we should be expecting firms to be looking to investment more in their future workforce. This is extremely disappointing.

It is also to be welcome that growth in Higher Apprenticeships continues apace, the number of starts up by a fifth in 2013/14 for young people under 24. This said, in 2013/14 Higher Apprenticeships were still only 2 per cent of all starts, a proportion that must increase if the social mobility potential of apprenticeships is to be realised. We said in our annual report that by 2020 a tenth of all starts should be at this level to expand routes to skilled, high mobility jobs.

It should not be forgotten that apprenticeship numbers were swollen considerably in 2010/11 when a significant proportion of workplace training was shifted onto the apprenticeship track. The number of over-25s that started apprenticeships jumped by a massive 130,000 in that year. So a decline in over-25 starts might just be a reversion to workplaces picking up training that may have been classified as apprenticeships over the past few years. If this means more funding and places available for younger people, this could be the sign of a positive shift.

The Commission expects the government to investigate the cause of these changes, and be transparent in what they find. Are we seeing the intended outcome of reforms or a decline in opportunities? If the latter, the government will need to set out how it intends to put this right. Either way at the moment, opportunities of high quality apprenticeships are not rising as we would hope.

The government has set itself a deadline of all apprenticeships being under the new frameworks by 2017/18. That milestone is fast approaching and if the government believes there to be a problem it needs to be fixed urgently.