Our State of the Nation highlighted a worrying fall in the numbers of part-time students. Universities UK (UUK) published a report yesterday showing further dramatic falls in part-time undergraduate study, which make uncomfortable reading for anyone interested in this mode of study.

Part-time study is absolutely vital for social mobility and the economy. For many who didn’t go to university, for whatever reason, as a teenager part-time study offers a vital route into higher education – so called ‘second chance learners’. This type of study offers students an opportunity to study while maintaining other responsibilities such as staying in work (82% earn while learning) or having caring duties. Almost half (44%) of part-time students are the first in their family to enter higher education and almost a third (29%) are from low-income backgrounds.

Part-time learning also plays an important aspect in upskilling the workforce, offering individuals an opportunity to retrain or learn new skills. Professor Mary Stuart highlights that by 2020, over 70% of the workforce will have completed its compulsory education, meaning that part-time degree level study is a vital learning route.

Current trends, however, suggest the HE part-time study route has becoming increasingly unattractive. So why are the numbers falling through the floor? The UUK report suggests that higher education institutions think the economic downturn and reforms to undergraduate funding are contributing to a worrying decline.

Certainly, fees for part-time study have increased by 27%. Alongside this the funding available for students has diminished, with HEFCE reporting that the “changing trend indicates that there are fewer entrants on part-time courses who are paying their own way, or who are able to find indirect sources of funding for their studies”. Employer funding has reduced significantly: from 40,000 students in 2008-09 and 2011-12 receiving employer support, which then fell to around 23,000 in 2012-13.

But that appears to only be part of the story. Research from HEFCE last year highlighted that a decline in part-time study is not an inevitable consequence of an economic recession. In fact, as the chart shows below, in 2010-2011 half of OECD countries saw a growth part-time study. 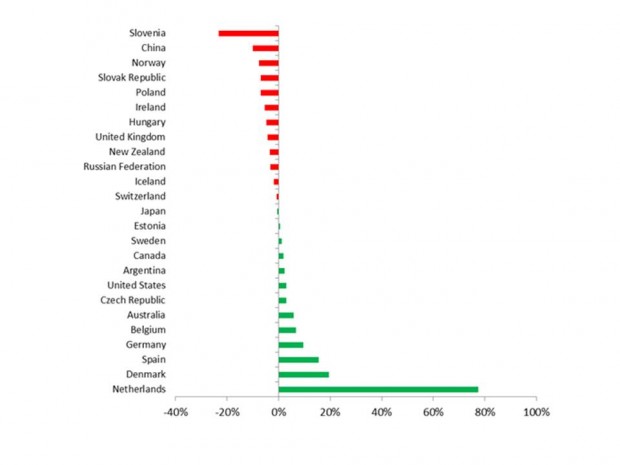 Clearly part-time study needn’t decrease, meaning there needs to be urgent action to fully understand why part-time student numbers are decreasing so rapidly in the UK. The Commission expressed concern about these continued falls and the lack of action by the Government to address them in its recent annual report.

To tackle this, the Government needs to develop an action plan with the explicit aim of increasing the number of part-time students. This would include developing a better understanding of why numbers are declining and putting in place measures to encourage and attract part-time learners. It’s worth considering issues like whether institutions are offering sufficient part-time provision and if the current part-time student support and fee regime is adequately structured to enable truly flexible and part-time learning.

Full time student numbers are increasing which is very welcome but the continued decline in part-time student numbers is deeply concerning as ultimately it means a far less diverse sector as well as fewer routes for “second chances” for those from less advantaged backgrounds.